Today’s post introduces you to Osran. Many of the characters in The Manx have at least a tiny bit of grounding in the real world whether it is the use of a real name, a mythical being, or a historical figure. Osran comes fresh from my imagination.

Her realm is in The Between. This is where the past, present, and future meet. Osran is the guardian of The Between making sure no one (magical or human) crosses from their own present into the past or future.

It is also where the energy for magic is generated. Whenever magic is used, the energy from it must be gathered in the Between to be redistributed back into the world. Osran oversees this process to be sure there are no flows that are uneven. Any imbalance will have catastrophic results affecting everything from the beginning of time to the end.

Osran is Kaitlin’s guide, and she will meet her for the first time in The Manx. Kaitlin doesn’t know what to make of Osran initially, but she feels comforted in her presence. Almost like an aunt or grandmother. They will make a formidable team as they fight to save both worlds which are on a collision course. 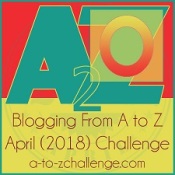 P is for Castle Peel