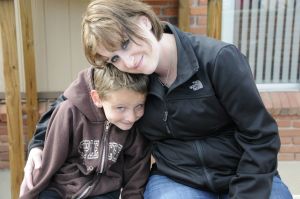 We are pleased to have Kristi Lloyd join us today to chat.

1. Tell us a little bit about yourself.

First of all, I would like to say thank you, KJ. It’s an honor and a privilege to have the opportunity to be featured on your blog.

I am an Army wife and stay-at-home mother of two children. I’m originally from a suburb of Pittsburgh, PA, but I’m currently living in Colorado. I have a bachelor’s degree in psychology and used to work in a psychiatric hospital, which has helped me with my writing. I have a blog at http://www.thumpsbumpsandthrills.blogspot.com. You can also find me on Facebook at http://www.facebook.com/kristi.l.lloyd or on Twitter @KristiLloyd1926. You may email me at generations1926@gmail.com.

2. What are you working on right now?

I’ve recently completed an urban fantasy novel, FAMILIAR GENERATIONS, the first of a series. I’m getting ready to “send it into the world,” a scary yet exciting sort of feeling! The second book of the series has started to unfold as well.

3. Of the books/stories you have written, which one would you like to tell us about?

Familiar Generations: Victoria Braumwell is a Wiccan with a number of psychic abilities, but her greatest downfall is that she’s terribly attracted to bad boys. When she meets Chaz Paglione, a mob boss-turned vampire, Vicki knows she finally found the real deal. While falling for Chaz, Vicki discovers she’s a partial vampire herself and is offered a position as a manager at a hot new nightclub in classic Mafia fashion. But when spirit activity becomes dangerous in her new place of employment, Vicki will need the help of her friends to ensure the nightclub is safe for its guests.

4. What was the hardest part about getting this book/story from the first ideas to publication?

I began writing this book about a year and a half ago, while my husband was deployed to Afghanistan. However, the idea for it first originated about ten years ago. I never had enough confidence to be able to sit down and write it though. The characters (most of them) were there in my head, but I didn’t think I’d be able to come up with a plot. One night, I put my kids in bed and started typing away. From that night on, I knew I had answered my calling to become a writer.

5. Where did you get your inspiration for this book?

I can’t remember a time when I wasn’t attracted to the paranormal. At the age of nine, I saw my first vampire movie, The Lost Boys. From that day on, vampires held me enthralled.

As for my characters themselves, Vicki is modeled after me. Since I first started writing, she has taken on a mind and personality that are all her own. Her two BFFs are characterizations of two important people in my life. As for Chaz, I don’t know where the heck he came from, he just showed up one night. I’ve learned to let him have his way.

6. What books or authors have influenced you the most and why?

R.L. Stein’s Fear Street books had me turning the pages.

In my opinion, if you’re writing within the vampire genre, you owe an immense amount of gratitude to Anne Rice. I don’t know that there’s much more to say about that.

Madelyn Alt’s Bewitching Mysteries Series gave me the courage to open up more about my religion.

Laurell K. Hamilton is a master at what she does. Her Anita Blake books are beyond fantastic. Ms. Hamilton was the first author that made me think it might be fun to fall in love with a vampire.

7. What are your favorite books that you have read simply for pleasure?

Most of the books I read, I do so for pleasure, even when I read non-fiction. The most recent fiction books I’ve found completely entertaining have been the Miss. Peregrin books by Ransom Riggs. As for non-fiction, I’m currently reading Young Al Capone: The Untold Story of Scarface in New York, 1899-1925 by William and John Balsamo (although I guess that one doesn’t count because it is part of my research, but it’s very interesting).

8. What does a typical writing day look like for you?

Unfortunately, the writing doesn’t have much space on my daily schedule. As a mom of a four- and a six-year old, I’m quite busy during the day, even when we’re just staying at home. But I do make a point to write every night once my son and daughter are in bed. I usually end up with anywhere between two and four hours of writing time, depending on how long I stay awake.

9. Do you have strategies for getting past those days that are hard to write?

Yes, sometimes I’ll watch a movie to get some creative juices flowing. I’ll often turn to films about gangsters, or sometimes witches. Goodfellas and Practical Magic are two that I particularly like. Otherwise, there are times when I merely sit and stare at the computer screen.

10. If you took a two-week vacation in any book or story, where would you go and who would you be?

I’ve always imagined I’d make a great Mayfair witch. The Witching Hour (Anne Rice) has always been at the top of my favorites list for books. Charlotte, Mary Beth, and Stella are the characters I adore most. And come on, who doesn’t love New Orleans?

Coming August 15: Chris Mandeville will be chatting with us about her new release, “52 Ways to Get Unstuck”.